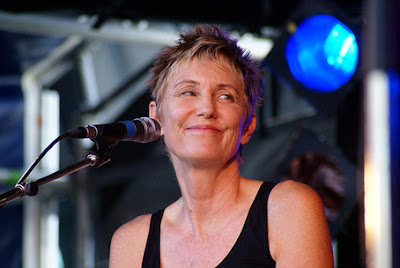 Eliza Gilkyson is yet another outstanding artist whose talent is inversely proportional with her name recognition. Come to think of it, I myself am guilty of being a latecomer to Eliza's music, but once I got started, there was no going back.

My first encounter with Eliza took place in January 2006 and the first thing that comes to mind when I think of that concert is the F-Bomb that she dropped right there on stage. Fine ladies who write beautiful lyrics and make gorgeous music needn't resort to bad language and that's just my opinion. Well, it happened only once, and otherwise the show was clean and quite good.

She sang many songs from her just-released album "Paradise Hotel", among them "Jedidiah 1777", "Man Of God", Borderline" and "Bellarosa". She spoke lovingly about her father, Terry Gilkyson, and sang "The Bare Necessities", one of his better-known songs.

Her show in October 2009 was just as good. Eliza's performance was warm and gentle, her voice was in perfect shape and the songs were all great. Nina Gerber accompanied her on guitar throughout the show. Brother Tony was there as well to help out on guitar and Van Dyke Parks assisted on piano. Eliza sang "Rare Bird and "Clever Disguise", both from her 2008 album titled "Beautiful World". There were no F-words this time.