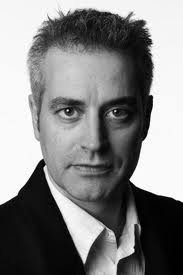 John Wesley Harding has a special place in my heart, well beyond my appreciation for his music: he is the first artist I've ever seen at McCabe's, the best concert venue in the Universe. Back in 1990, my interest in Wes' music was at its peak, so I did not think much about driving 102 miles, round trip, to catch him live in concert. His show was terrific, so I went back a few more times to see him again. But then, in 1996, I felt that his newer albums just weren't as good as his earlier ones, so I began drifting away from his music and eventually stopped following him altogether.

Sooner or later, it had to happen ... I reconnected with Wes in July 2007, after an eleven-year long hiatus, and I'm very glad I did.  He came out with his reconstituted old band, the Radical Gentlemen:

Chris von Sneidern - bass
Kevin Jarvis - drums
Kirk Swan - guitar
Wes looked more mature - surprise, surprise - but sounded just like his old self and exuded the same self-confidence he had always had. There were many new songs, but they all sounded good to me, especially the self-deprecating "Top Of The Bottom". He also sang a couple of songs from "Here Comes The Groom", which to this day I believe is his best album.
Long-time friend and musical partner Chris von Sneidern opened for Wes in October 2009. His set was surprisingly good, with quite a few catchy songs.
My friend Steve A, who had not seen Wes before, took my advice and showed up as well. We sat together in the front row, from where we enjoyed a very good performance. Wes received support from half of the Radical Gentlemen, namely Chris von Sneidern and Robert Lloyd.
Posted by Gabe at 8:46 AM