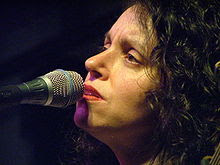 On May 22, 1999, I went out on a limb and took a few friends - Mark, Joann, Bill & Lynda, along with my wife - to see a singer-songwriter I knew very little about: Lucy Kaplansky. The concert took place at the Neighborhood Church in Pasadena, the home of the now-defunct "Acoustic  Music Series". The show started a bit slow and I felt guilty about having troubled some of my best friends. But things started to improve when Lucy sat down at the piano and delivered a wonderful version of "I Still Miss Someone". A few songs later, she was joined by a funny and versatile musician by the name of Matt Cartsonis, and together they managed to keep our attention for the rest of the evening. She sang a funny number titled "Song About Pi", written by her father, a mathematician and amateur songwriter - the song was received enthusiastically by the crowd. All-in-all, I liked her show very much and decided that I had to see her again.

Following my successful introduction to Lucy's music in May 1999, I caught her two more times in 2000, then yet two more times in 2001, at McCabe's and the Neighborhood Church. That was clearly excessive and in November 2001 I reached the inevitable saturation point. The fact that Lucy was not coming up fast enough with brand new stories for her gigs did not help matters and I can't even blame her for that. Long story short, it took me eight years and some apprehension before I went back to see her again.

However, the same first shows that brought me to the saturation point also had many great moments. I liked Lucy's choice of covers, among them Loudon Wainwright's "Swimming Song". Her gospel songs were always great. I also liked "By Way Of Sorrow", a song recorded by Cry, Cry, Cry. A couple of times Lucy was helped out by Nina Gerber, an outstanding guitarist.

The most unforgettable moment took place in 2000, when eighty-year-old Irving Kaplansky, Lucy's father, joined her on stage at the Neighborhood Church for a couple of his great math-themed songs, which he performed with great enthusiasm and joy.

Here's an autograph Lucy signed for me in April 2000: 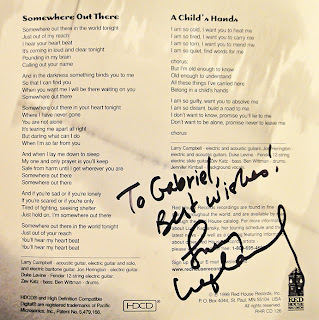 Two setlists from the McCabe's concerts that I've attended: 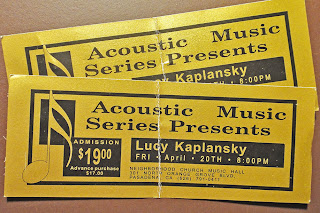 In February 2009, after having skipped eight-year's worth of Lucy concerts in the LA area, I finally went back to McCabe's to see her again and I'm glad I did. Naturally, she looked a bit older, but her voice had become warmer and richer. I liked her new songs and I was happy to see that old favorites, such as "Ten Year Night", a.k.a. "The Kitchen Floor Song", were still on her list. Her stories about Molly, her adopted daughter, were fun to listen to.

The highlight of the show was Leonard Cohen's "Hallelujah", complete with Lucy's own piano accompaniment.

On March 13, 2010, I went back yet again to see her at McCabe's - where else? This time I talked my friends S & C into joining me. It was their first time to see Lucy and they both liked her very much. Once again, she played "Hallelujah" and it was great.