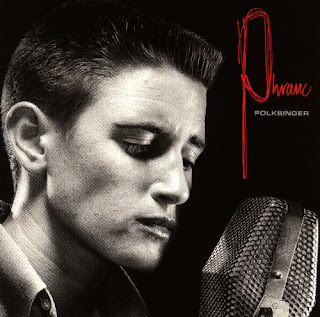 I can't say that it was a great concert. I can't say it was bad either, just a bit different and it wasn't because my gender was in the minority there. That I expected.

Phranc introduced herself, redundantly, as the All-American Jewish Lesbian Folksinger, then went on to celebrate her sexual orientation in words and music, much to the enthusiastic approval of the crowd. She was in "OK" vocal shape, sang a few good songs, but overall, her show was uni-dimensional and by the time the proceedings ended, I was ready to head home.

I can recall only a few songs: "Bulldagger Swagger" and "M-A-R-T-I-N-A", dedicated to Martina Navratilova, of course.


The evening started with a big surprise: there was no opening act on the bill, yet - out of the blue - Exene Cervenka showed up and played a good set of decent length, with vocal accompaniment by Cindy Wasserman. Exene sang songs from her then-current album, titled "Somewhere Gone".