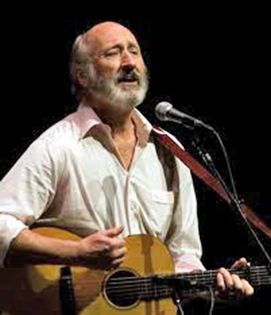 Exactly twenty five years after I saw Peter, Paul & Mary at the Universal Amphitheater, and six months after Mary's passing, I went to McCabe's to see Paul Stookey solo. I wasn't expecting a high-energy, fast-paced show. On the contrary, I was in the mood for nostalgia, for something relaxing and heart-warming, I wanted to hear something intelligent and humorous, and that is exactly what I got.

The show took place on a Friday night, with the usual bad traffic. By the time I got there, there were at least 60-70 people in line ahead of me, yet I still managed to sit in the front row (thanks, Mikki, for your help).

From the get-go, Paul told us that he would not be singing the "greatest hits of his old group", and he didn't. With one notable exception, the show consisted of nothing but Paul's solo material, with plenty of good songs, most of them unknown to me. But it didn't matter - his music was very accessible and definitely enjoyable. Paul spoke about and sang his best-known solo piece, "The Wedding Song (There Is Love)", written for Peter Yarrow shortly before Peter's wedding.

The encore brought us "Blowing In The Wind", the evening's only song from Peter, Paul & Mary's repertoire. Of course, the song quickly became a sing-along, in which I was an active participant. Great moment!

Peter spoke with love and warmth about Mary Travers and he did it with a chocking voice and tears in his eyes.