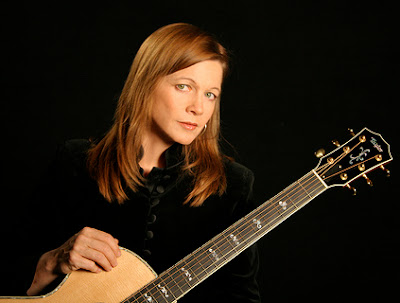 Carrie Newcomer is yet another low-profile singer-songwriter who managed to make a return-customer out of me. I first saw her in  2008, shortly after her "The Geography of Light" album came out. At that time, I was rather unfamiliar with her music, but the songs she played then - "Don't Push Send", "There is a Tree", "Geode", "Leaves Don't Drop, They Just Let Go" and especially "Where You Been" - made me want to dig deeper into her catalog, starting with her "Best Of" CD, which I bought right there and then.

The second time I saw Carrie was in 2010, also at McCabe's, and - just like in 2008 - I went home feeling good, feeling satisfied, and that's what Carrie's gentle, warm and intelligent music will do to you every time. The show was the "CD Release Party" for her "Before And After" album. Carrie played the acoustic guitar and was accompanied on piano by Gary Walters.

The highlights of the show were "If Not Now", from her new album, and the older "The Gathering Of Spirits", from her 2002 album of the same name. Very nice.