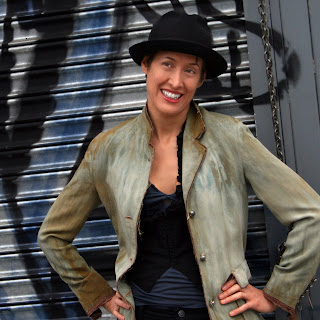 What stands out the most in my mind when I think about this concert is that the undisputed highlight of the show happened during the intermission. Strange, but totally true. At the end of her first set, Michelle did not leave the stage. Instead, together with Jim Chayka (banjo) and fiddler Katy Rexford (if I'm not mistaken), they formed a tight circle and played a long version of "Arkansas Traveler", pretty much in the vein of her recorded version. During this unforgettable musical interlude, the lights were on and many people left the concert room. But not me - I just stood there mesmerized by the quality of the performance and the immense joy exhibited by the three musicians.

The show proper started with great promise, as Michelle announced that she would sing many of her older songs. So we all got to hear acoustic versions of "Anchorage", "Memories Of East Texas", "Graffiti Limbo" and a few others, but I would have preferred if she had stuck to the original vocal and instrumental arrangements. But you know Michelle: she is not bound by any rules and regulations, so she pumped new life into these old gems.

Otherwise it was a typical Michelle Shocked concert, with the usual excessive chatter, but with great vocals and good guitar playing. The band that backed her up, the Jim Chayka Trio, was top-notch, I wouldn't mind seeing them again.


Watch the original "Anchorage"video - her newer music is not bad, but her earlier stuff is still the best.