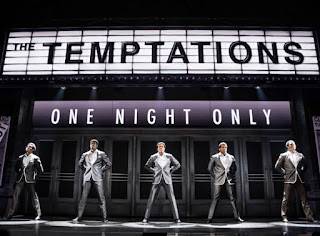 I seldom attend musicals, but how could I have resisted the temptation of seeing a show that is based on the career of the Temptations, one of my all-time favorite vocal groups? So I shelled out the big bucks and got myself a front row seat at the Ahmanson Theatre, in spite of having some reservations about sitting that close to the stage.

I loved the show and how could I have not, with all that great singing, dynamic dancing and captivating storyline? Yes, the success of the show had a lot to do with our feelings of nostalgia, but it was a lot more than that - the young artists who played the various revolving members of the band were all outstanding and equally good were those who played the secondary roles of Berry Gordy, Smokey Robinson, Tammi Terrell, Norman Whitfield and the Supremes.


And what about my front row seat? Was it too close? Not at all.

Email ThisBlogThis!Share to TwitterShare to FacebookShare to Pinterest
Labels: Life and Times of the Temptations, The