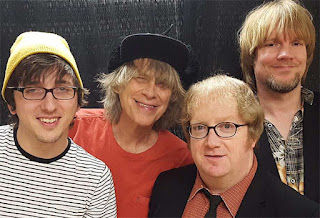 Seventy minutes into the concert, keyboardist and band leader Terry Adams announced that NRBQ's contractual obligations have been fulfilled, yet they would keep playing. At that point, driven by the unbearably high decibel level of the concert, I got up and bailed out early, something I seldom do.

I have attended almost five hundred shows at McCabe's, so I can say that I've seen it all. Also heard it all. This was by far the loudest concert I have ever attended there and that wasn't the only thing that set this show apart from all the others. Sitting right next to me was a group of young ladies who expressed their appreciation of the performance by screaming incessantly, from the top of their lungs.

Seventy minutes of extra-loud music and screaming fans ... I'm surprised that I lasted there for as long as I did.

A few words about the music. The band is good, no doubt, and - under more favorable circumstances - I could see myself being a fan of what they do. I recognized two cover songs, "Wouldn't It Be Nice", the old Beach Boys gem and "The Peanut Vendor", a song I first heard with Perez Prado, in my childhood. I suppose the songs I did not recognize were the band's original compositions. Among them, "Walkin'" and "All Night Long" caught my ear.

The band consisted of Terry Adams (keyboards), Scott Ligon (vocals, guitar), Casey McDonough (vocals, bass) and John Perrin (drums). As I said, they are all fine musicians, but their choice of cranking up the speakers to 11 made me leave before the end of the show.

So what was the first thing I did when I got home? That's easy to guess: I ordered a pair of high-quality concert ear plugs. 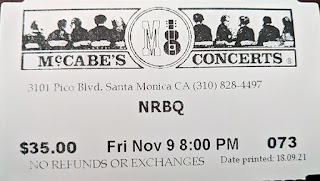 Email ThisBlogThis!Share to TwitterShare to FacebookShare to Pinterest
Labels: NRBQ