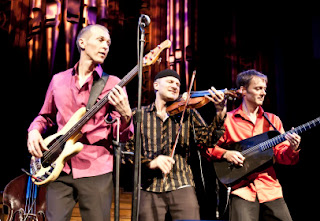 Hailing from Toronto, Canada, and appearing Saturday night as a trio, the Sultans of String put on an unexpectedly good show  It's not that I had been expecting a bad show, but it did occur to me that I could be in for a long and possibly boring night. As it turned out, Chris McKhool (violin), Kevin LaLiberté (guitar) and Drew Birston (bass) were not only outstanding musicians, but also good entertainers.

When we walked into the concert room, the first thing we noticed were the microphones, monitors and all other gear placed on the floor, directly in front of the empty stage. An explanation was in order, and it came without much delay: the Sultans wanted a set-up that was also suitable for the band's children's matinee show scheduled for the following morning.

With the exception of one song, Neil Young's "Heart Of Gold", the Sultans delivered an all-instrumental set that, to their credit, managed to keep my mind fully focused on the show from end to end. Individually and collectively, they truly shined during their entire set. I particularly liked Drew's solos on his electric bass guitar. Overall, it was a very pleasant evening.

Email ThisBlogThis!Share to TwitterShare to FacebookShare to Pinterest
Labels: Sultans Of String, The