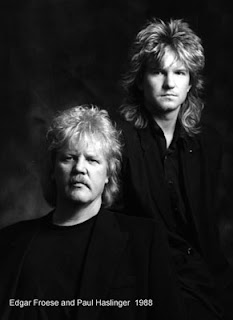 My first show of many at the now-renamed Universal Amphitheatre. In preparation for the show, I had been listening in my car to a cassette tape of two Tangerine Dream albums, yet the show was a massive surprise.

I sat at the balcony in the front row, a great vintage point for a highly visual production that involved much more than just the stage. With laser lights shooting from everywhere, with countless visual special effects, not to mention the out-of-this-world sounds, the show has left a lasting impression on me. And all that rich audio and video display was accomplished by two musicians only, who sat practically motionless in front of their oversized high-tech gear, as if they were not part of the show.

On the minus side, the show has had a negative side effect: just listening to Tangerine Dream's music is an underwhelming experience now.
Posted by Gabe at 9:03 AM