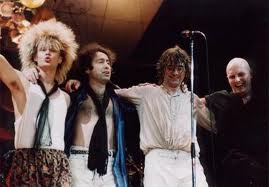 Jimmy Page and Paul Rodgers - two of the biggest names in rock - yet together, as the Firm, they haven't achieved much. Two national tours and two rather forgettable albums later, the Firm disbanded to no one's chagrin. Still, it was fun going to the Forum to see my first concert there.

In spite of some decent support from KLOS and KMET, the Firm had failed to excite the masses, so no wonder that the show was not a sellout. Just like me, most people were there to see two legends in actions, and it that respect, we all got our money's worth. We did get to hear "Radioactive" and "All The King's Horses", two of their more palatable songs.


Here's a live version of "Radioactive":