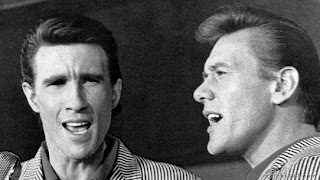 My parents were visiting us in 1983, it was our job to entertain them, so one fine day we took them to Disneyland. Not coincidentally, the Righteous Brothers were giving a concert on the very same day. The stage was set up on Tom Sawyer Island, not far from the Pirates of the Caribbean, so the crowd had to watch the show from the "mainland", where there was no seating at all. My folks weren't too thrilled about standing there for a full hour before the show, but being there early gave me the best possible vantage point. 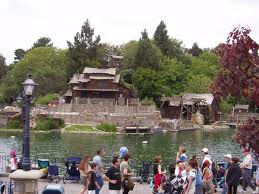 Bill Medley and Bobby Hatfield arrived on a motorized raft. When they sang together in harmony, they sounded just like one would expect the Righteous Brothers to sound. Bill's voice was as powerful as ever, but Bobby's solo moments weren't quite as good - he had some trouble hitting Unchained Melody's high notes. But they did most of their greatest hits and everyone was happy.

The show ended with the two hopping back on the raft, which then took them just a couple of feet from the "mainland". Then they were gone.

My father, who was in his 70s at the time, was quite impressed with the show. Unlike my mother.

Driving home, I remember constantly going from one oldie radio station to another, hoping to hear the Brothers sing, but no luck.
Posted by Gabe at 9:50 PM