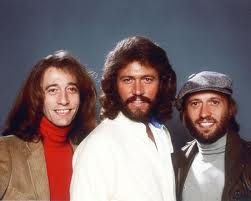 One of my all-time guilty pleasures, I've been listening to the Bee Gees ever since their "Bee Gees First" album came out in the 1960s. To this day, I love their first four albums, not counting their early Australia-only releases. My interest in them took a major beating during their disco period and after that, I have never truly reconnected with their music. But to see them live is a different matter altogether.

The LA gig was part of a major world tour, that took them to many countries, including Australia. I sat in the first section, the one with double-letter rows. The show began with some highly spectacular bright lights and explosions that culminated with the silhouettes of the three brothers standing there motionless. There were many more special effects throughout the show.

The setlist covered their entire career, as expected. Barry sang most of the songs, but Robin had his moments, too. Both were in great vocal form. They sang "To Love Somebody", "Massachusetts", "Lonely Days", "Words" and many others. They also played some of the songs they wrote for others, such as "Heartbreaker" and "Islands In The Stream".

This video, recorded in 1989 during the same world tour, demonstrates the quality of their live show:

Later in the set, when they started their medley of disco hits, it was party-time for most, but for me it was potty-time. Still, in spite of the disco slip-up, it was a fabulous night.
Posted by Gabe at 9:51 PM

Email ThisBlogThis!Share to TwitterShare to FacebookShare to Pinterest
Labels: Bee Gees (The)