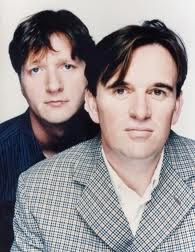 My second time to see the Squeeze, who had become one of my favorite bands. I had a good floor seat, about fourteen rows back, dead center. No Paul Carrack and no Jools Holland in the line-up. But they had Jools' little brother, Christopher Holland, a good keyboard player himself, he even looked a bit like Jools.

Before the show, they were playing some truly great music via de PA system and I badly wanted to know who the artist was. So I went to the soundboard guy and he showed me the just-released Jools Holland album titled  "World Of His Own". The song that caught my ear was "Architectural Number", the album's opening track, so although not there, Jools still left his mark.

Other then "Tempted", I don't remember any of the songs they played. nor could I find their set list on the Internet. But it was a good show.


The opening act was an all-female band called the Rebel Pebbles. They were  totally forgettable, no wonder I haven't heard of them since.


Here's the lip-synched original version of "Tempted":
Posted by Gabe at 9:16 PM