Over the years, I have had little luck getting good seats via Ticketmaster, but this time I had a work-around: a coworker, an Englishman named Phil, whose wife worked at the Colliseum, got me two choice seats, just seven rows from the stage, dead center. That means I had 80,000 screaming fans behind me, each and every one of them hollering in my general direction.
This was part of the Steel Wheels World Tour, with four shows in Los Angeles. I gave the extra ticket to my good friend Jack, and after a short stop at a famous Greek deli store, we entered the Colliseum. We sat right in front of the huge stage, the largest one I'd ever seen. 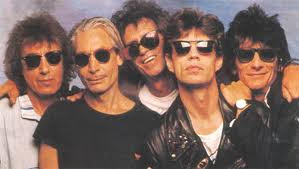 Here's how the Stones kicked off their set:
And here's the stage, imagine sitting right in front of it, only seven rows back: 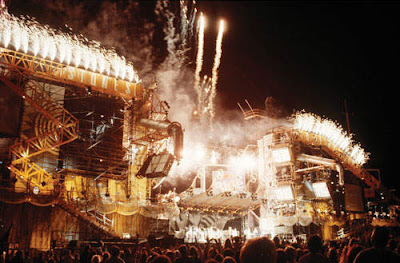 SET LIST
1. Start Me Up
2. Bitch
3. Sad, Sad, Sad
4. Undercover of the Night
5. One Hit
6.  Tumbling Dice
7. Miss You
8.  Ruby Tuesday
9. Play With Fire
10. Dead Flowers
11. Rock and a Hard Place
12. Mixed Emotions
13. Honky Tonk Women
14. Midnight Rambler
15. You Can't Always Get What You Want
16. Before They Make Me Run
17. Happy
18. Paint It Black
19. 2000 Light Years from Home
20. Sympathy For The Devil
21. Gimme Shelter
22. It's Only Rock 'n' Roll (But I Like It)
23. Brown Sugar
24. (I Can't Get No) Satisfaction
25. Jumpin' Jack Flash
The Guns N'Roses played a full set just before the Stones came out. The Gunners could have probably filled the stadium by themselves - 1989 was the peak of their popularity. Axl Rose did not talk nonsense, instead he was focused on his singing. Slash kept a relatively low profile throughout the set. They played "Welcome To The Jungle", among other songs. At one point during the show, Axl left the stage, returned bare chested and with a new pair of pants, then after a minute or so, he turned his back to the crowd, only to reveal that a large circular part of the seat of his pants was missing.
The show was opened by Living Color, whose song titled "Cult Of Personality" was receiving decent air play during those months.
Overall, the show was great, although a bit too loud even for my standards. I had a buzz in my ears for a few days after show, but luckily, it went away. It was a thrill being so close to the stage and being able to see facial expressions with your naked eyes.
Another unforgettable memory - the restroom situation. There weren't too many intellectual types among the crowd, and that showed in their toilet habits. I saw floors flooded with urine, I saw people peeing on walls, it wasn't a pretty sight, nor did it smell good. When finally I reached a decent-looking men's room, it had been taken over by representatives of the opposing gender, attracted by the shorter lines there. Long live rock & roll. 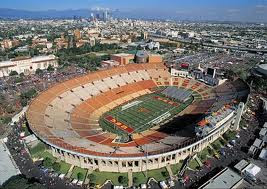