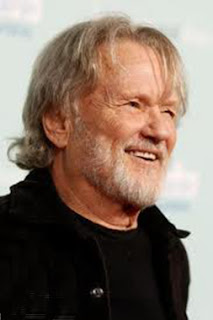 After the mind-blowing Kris Kristofferson concert I attended in October 2008, I absolutely had to see him again, preferably solo and acoustic. The opportunity came one year later, at the beautiful Walt Disney Concert Hall. I sat three or four rows from the stage, on the left side, close enough to see his facial expressions.

The stage was practically empty, with just the bare essentials a singer-songwriter would need. Dressed in black, Kris came out with his acoustic guitar and a harmonica hanging from his neck. He opened with "Closer To The Bone," the title track from his most recent album. What followed was a true "Best Of Kris Kristofferson", with at least twenty five songs, mostly his gems from decades ago, but also some newer songs, which, by the way, sounded quite good and were well received by the crowd.

PARTIAL SET LIST
"Jesus Was A Capricorn,"
"Shipwrecked In The Eighties"
"Me And Bobby McGee"
"Help Me Make It Through the Night"
"For The Good Times"
"Sunday Mornin' Comin' Down"
"Jody And The Kid"
"Thank You"
"Here Comes That Rainbow Again"
"Love Don't Live Here Anymore"
"Darby's Castle"
"The Silver-Tongued Devil And I"
"Closer To The Bone"
"Why Me Lord"
"The Pilgrim: Chapter 33"
"Loving Her Was Easier (Than Anything I'll Ever Do Again)"
With songs like these, you don't need a tenor's voice, nor the guitar chops of Jimi Hendrix to keep an audience captive. Kris' voice was a bit rockier than during his younger days, but that's exactly how I was expecting it to sound at his tender age of seventy-three. He ended most songs with the same two quick words, "Thank You", meant to signal that it was time for us to applaud.
Here's a short video of Kris Kristofferson singing "Help Me Make It Through The Night":
The show was not a sell out, but there were plenty of people there. Kris appeared to be a humble artist who was happy to still be able to draw a crowd.
Posted by Gabe at 9:00 PM