Was this a doubleheader, with Jill Sobule and Erin McKeown enjoying "equal billing" status, or was Jill the opening act for the headlining Erin? Hard to tell and it didn't matter. Fact is that Jill came out first, played a set of decent length, then Erin took over after the intermission. But they were also each other's guests, so they ended up spending quite a bit of time together on the stage.

The show was part of their national tour jokingly named "The Clash Of The Legends", which came complete with a poster billing Jill and Erin as "The Western Menace Of Colorado" and "The Northeast Bomber Of Massachusetts", respectively. My friend Steve, a long-time Jill Sobule fan, was at McCabe's as well, we often coordinate our ticket purchases there. 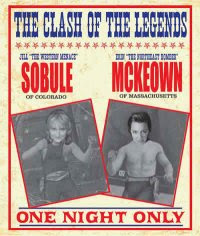 Jill's set included "Where Is Bobbie Gentry" and "A Good Life", my favorite two Jill songs. As always, she played acoustic. Erin writes good songs and knows how to deliver them, trouble is I can't recall any titles. There was plenty of good humor and lots of great music.

The highlight of the evening was ... me! Here's what happened: during the encore, when Jill and Erin were getting ready to sing Neil Diamond's "They're Coming To America", Jill asked for someone to hold up the lyrics sheet, for them to see. Well, I was sitting directly in front of her, so the next thing I knew, I was part of the show!

After the show, both Jill and Erin spent some time with their fans, which gave Steve and I the opportunity to pose together with Jill.