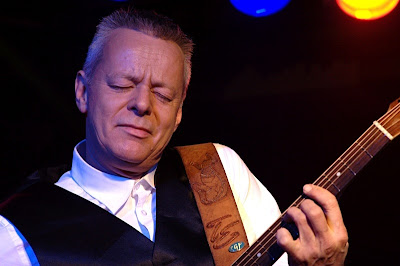 Tommy Emmanuel, two days in a row - not bad. Not bad even if you have to drive over 300 miles in order to catch both shows, like I had to do. But it was worth it for me and also for my two guests, one on each night. For the first night I went with my brother, who happened to be in the area on business. He had not seen Tommy before. The following evening I went with my friend Lincoln, a repeat Tommy customer.

Tommy was phenomenal - enough said - I won't even try to describe in words what he does with his guitar or how good he is. I'll let YouTube do the "talking". Here's "Guitar Boogie":


The two shows were similar, but not quite identical. Here's a partial list of the songs that Tommy played at Pepperdine's Smothers Theater on February 9 and 10, 2010: