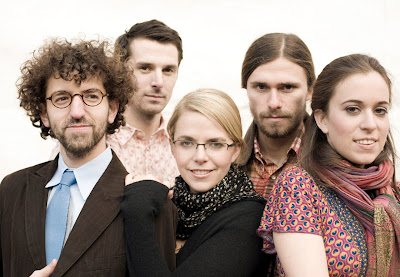 I did listen to Wayne Griffith - in August 2009, he told me not to miss Crooked Still's upcoming show at McCabe's, so I bought myself a ticket, no questions asked.

But then I didn't listen to Wayne Griffith - on November 22, thirty minutes before Crooked Still came out, he told me not to sit in the front row. For those who don't know, Wayne happens to be the Guitar Shop's long-serving sound engineer, so he knows very well where to sit for the best sound. He also knows where not to sit and the front row is one of those places. But I just can't help it. Period. I can't have anyone between me and my beloved musicians, or as I sometimes put it, I must be within the saliva range of the performer.

As far as the quality of the sound is concerned, sitting in the front row is seldom a problem at McCabe's. But it was on November 22. The best part of Crooked Still is the divine voice of Aoife O'Donovan - I would have preferred to hear nothing but her voice, but when you sit only two steps away from the fiddler and right in front of the banjo player, you're bound to hear more fiddle and more banjo than anything else.

So would I listen to Wayne the next time he tells me to move a few rows back? Probably not!


The best parts of the concert happened when the band wasn't as intense and allowed Aoife's voice to take center stage. I liked "Darling Corey", the show opener, "New Railroad", "Ain't No Grave", "Little Sadie", Bob Dylan's "Oxford Town" and "Come On In My Kitchen". They also played "Captain Captain", "Sometimes In This Country", "Lovesick Redstick Blues" and "The Golden Vanity".

I didn't care much for the excessively whiny and often dissonant sounds of Brittany Haas' fiddle, but I guess that's how modern bluegrass is supposed to sound. Greg Liszt is a heck of a banjo player, capable of playing the traditional style, but also a more modern, or perhaps more personal, form that wasn't melodic enough for my taste.

When time came to introduce the band, they did it in an original and fun way: they introduced each other, one after the other. After the show I got Aoife's autograph, here it is: 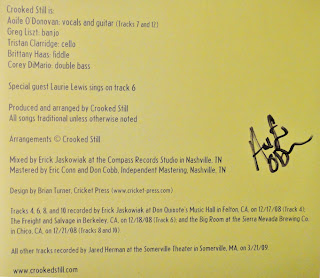 The show was opened by King Wilkie - I have no lasting impressions from their set. 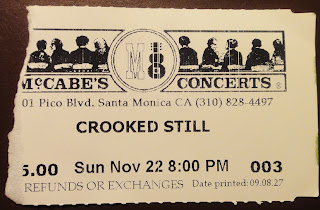