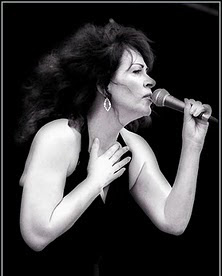 As far as I was concerned, in 2008 Janiva Magness was nothing but the name of a blues artist I used to occasionally see on the Internet. Then one day she was booked to appear at McCabe's, which was sufficient reason for me to start looking into her music. I liked what I found, bought two tickets for her October 25, 2008, show and the rest is history.

The show started with two warm-up songs played by her band. Not bad. Then Janiva came out and knocked me out with her very first song. She went on to deliver a passionate and intense set of mostly funky uptempo songs, also a few ballads, all sung with power and feeling. The number that stood out the most was "You Were Never Mine", a fantastic ballad written, I learned later, by Delbert McClinton. This song has become - I think - Janiva's signature song. My wife was less appreciative of Janiva's performance, as she prefers softer and milder vocals. Well, Janiva is a blues belter, she's the real thing, so power and intensity is her game.

Jeff Turmes, Janiva's husband and occasional sax player in her band, is also a songwriter - Janiva never forgot to credit him whenever she performed one of his songs. Jeff was on stage with Janiva whenever there was no conflict with his other engagements.

Following my introduction to Janiva's world, I went to each and every subsequent appearance of hers at McCabe's. The shows I saw on June 6, 2009, and January 29, 2010, were as good as the first one and followed pretty much the same pattern: first the band warms up the room with two blues jams, then guitarist Zack Zunis introduces Janiva. After the intermission, yet two more band instrumentals, then more Janiva and finally an encore.

Watch "Get It, Get It", a song that she sang every time I saw her:


Janiva makes no secret of her age. Provocatively under-dressed, she announces her age at every show and I can tell you that, from my front row vantage point, she looks great.

In January 2010, Janiva spoke highly of Koko Taylor, who had passed away a few months earlier, then sang Koko's "Wang Dang Doodle".

After every show at McCabe's, a humble-looking Janiva mingled with her fans, signed autographs and appeared to be truly grateful for having fans who come to see her.

Here's a partial list of the songs performed by Janiva Magness at McCabe's:
"Sometimes Yyou've Got To Gamble".
"What Love Will Do".
"Bad Blood"
"You Were Never Mine"
"Wang Dang Doodle"
"Get It, Get It"
"Walking In The Sun"
"The Devil Was An Angel Too"