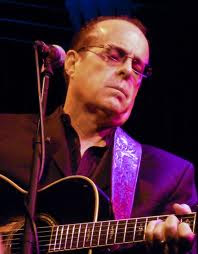 This was my fifth Tom Russell concert in ten years. Showing no signs of slowing down, Tom put on an excellent show, full of great music and fun stories. Too many stories, some may opine, and they may be right. There was plenty of namedropping, too, but none of that took away from the quality of his show.

Accompanied by guitarist Thad Beckman, Tom played many songs from "Blood And Candle Smoke", his then-current album, as well as a few of his oldies, but believe it or not, "Gallo Del Cielo" was not among them.

Here's a partial set list:
"East of Woodstock, West of VietNam"
"Nina Simone"
"Mississippi River Runnin' Backwards"
"The Most Dangerous Woman in America"
"Darkness Visible
"American Rivers"
"Finding You"
"Blue Wing"
"Stealing Electricity"
"Who's Gonna Build Your Wall"
Thad Beckman was outstanding. Tom is a decent guitar player, but his shows benefit tremendously from the presence of true virtuosos such as Thad, who - by the way - can also sing.

Tom spoke about Nadine, his wife, a Swiss lady who typically travels with Tom from town to town, helping out with managerial tasks and selling merchandise. The crowd gasped when Tom mentioned the names of his best men at his 2007 wedding: Ian Tyson and Ramblin' Jack Elliott.

Tom had a guest, singer-songwriter Steve Young, who sang his own "Seven Bridges Road", one of his early songs, later recorded by the Eagles.

A minor complaint - Tom's repeated use of the word "Bastards!", delivered in a snarly manner in various contexts, was fun at first, but then it became tiresome, even irritating.

After the show, Tom and Nadine mingled with the crowd.

Nancy & Jim, our guests for the show, had their introduction to both McCabe's and Tom Russell. A very successful introduction, I might add.