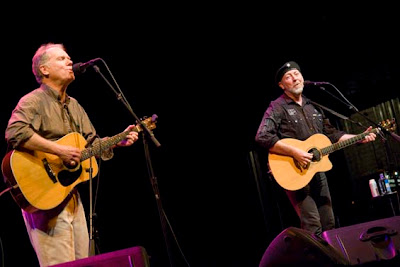 Loudo and RT - a pairing made in heaven, if there ever was one. I first started hearing rumors about a possible tour involving the two in 2008. Then the announcement came and a few months later I was holding in my hand a priceless ticket that entitled me to sit in the third row, dead center. That was a well-deserved reward for a true fan of both artists - at that point in time, I had seen them for a combined total of thirty-five times (seventeen times Loudon, eighteen times Richard).

Their tour had a fabulous name: "Loud and Rich". I can imagine how much fun they had spending time together, after having been good friends and musical collaborators for so many years.

Loudon opened the show with a fairly long set, seventy minutes in all. I was in the mood for an evening of "Loudon's Best", but it was Loudon who called the shots and he chose to showcase some of his newer material. He had just written a series of songs about the country's ailing economy and financial collapse. "I plan to cash in", said Loudon, then he went ahead and played "Cash For Clunkers". He also played a few songs from his "Charlie Poole Project" album, which later brought him his first and only Grammy.

Loudon sang "Unfriendly Skies", a very funny song about an airline employee named Suzie who had mistreated his Martin guitar at the Durango airport. Also in Loudon's set list: "Half Fist", "Dead Man" and "White Winos". Richard joined him on stage for Loudon's last two songs, one of them was "If I Lose".


After the intermission, out came Richard Thompson, with better-than-ever vocals and powerful and precise guitar playing. Among other songs, he played "Cold Kisses", "Time Will Break You" from "Cabaret Of Souls", "Crawl Back" and "1952 Vincent Black Lightning". Later in the set, Loudon joined Richard for a few more songs together: "Down Where The Drunkards Roll", Bob Dylan's "You Ain't Goin' Nowhere", Leiber & Stoller's "Smokey Joe's Cafe" and finally "At The End Of A Long, Lonely Day" from the repertoire of Marty Robbins. At one point, Loudon broke one of his guitar strings and while he was busy with his problem, Richard played a few bars from "Mr. Sandman", which was his humorous and very musical way of faking a yawn. 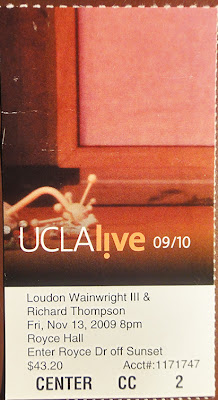 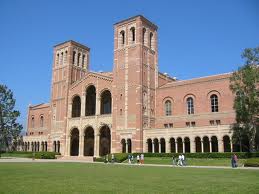