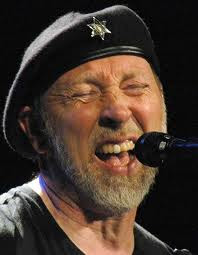 You don't often mention "RT" and "disappointment" in the same sentence, but on this occasion, I did. After about one hour and twenty five minutes of decent music, the performers reached the end of the show, they took a few bows, smiled and waived at the cheering crowd, left the stage, came back, more bows, more waiving, left again, then the lights went on and it was all over ... What? No encore?? Are you kidding me??? After not even 90 minutes of music??? It took me two hours of tough driving to get to UCLA on a wet Friday night, so yes, I was disappointed, to put it mildly. 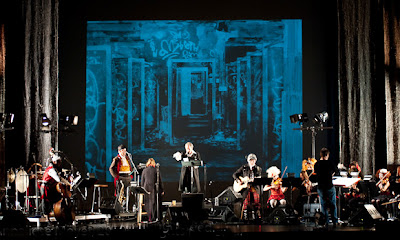 RT was surrounded by well-known musicians - Harry Shearer, Judith Owen, Debra Dobkin, David Piltch and Pete Zorn - plus the Idyllwild Arts Academy Orchestra, all wearing costumes, fancy hairdos and plenty of face paint. The whole atmosphere was totally different from any of my many previous encounters with Richard. The music was good, but not great and Richard kept a relatively low profile throughout the evening.


Some of the best moments of the evening belonged to long-time RT collaborator Judith Owen. The Idyllwild string orchestra was very good as well. Harry Shearer, Judith's husband, was the narrator of the show, so he didn't sing much.

I would have loved to have RT come back with at least some of the performers and do a couple of his classic songs, but it wasn't to be.