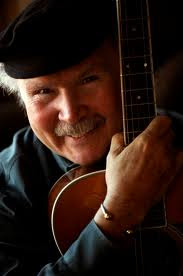 I had seen Tom Paxton a few times before, but I went back to McCabe's mostly because I wanted to sing "The Last Thing On My Mind" with him one more time.

Tom came out with string performer Fred Sokolow, they played together a set of decent length, with quite a few good stories between songs. I was hoping that Tom would bring out an unannounced guest, someone big, but it didn't happen. Tom's voice was strong and he made no mistakes at all. It appears to me that he has no intentions of slowing down. 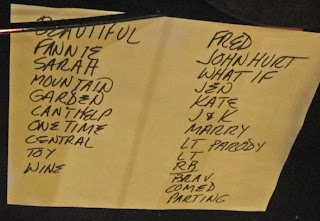 During the intermission, I photographed the set list, which consisted of nothing but abbreviations - I guess he had sung these songs before.

Toy, Wine and RB are "The Marvelous Toy", "Bottle Of Wine" and "Ramblin' Boy", respectively.


LT is "The Last Thing On My Mind", while LT Parody is a fan-written thing that appears on Tom's "Live At McCabe's" album and it goes like this:

Well I met this young girl at a folk club,
Like you do, like you do.
So I bought her a drink and we chatted,
Wouldn’t you, wouldn’t you.
And then after the show she invited me home,
And she said we were two of a kind,
Then she played me every record
That Tom Paxton ever made,
And you know that was the last thing on my mind.
Immediately after the intermission, Fred Sokolow sang one his own songs, a good one, then Tom rejoined him on stage. It was a good concert overall and yes, "The Last Thing On My Mind" did turn into an instant sing-along in which I was an active participant.