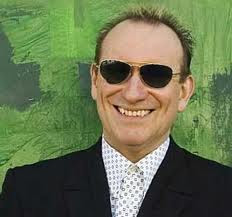 Boy, was I wrong ... for years I'd been aware of Colin Hay's many appearances at various small clubs in the LA area, Largo in particular, but to me, Colin Hay was nothing but a has-been whose time has long passed. But then, a couple of years ago, my son Danny and our friend Ralph exposed me to "Beautiful World", which sort of opened my curiosity to look into Colin's newer material. That's how I discovered "Are You Lookin' At Me", an excellent album released in 2007. I also heard the "Man At Work" album, Colin's re-recordings of his Men At Work hits, all sounding very good. Since then, I'd been on the lookout, hoping to catch him live at a good venue. 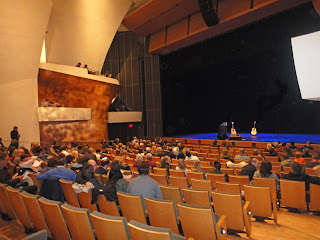 Last night's show at the Broad Stage in Santa Monica was sensational, and I had the pleasure of watching it from the front row, center, together with my wife and our good friends Ralph, Laura, Wayne and Maria.

The sound was good, the crowd behaved well, so I'll definitely go back to the venue, even though tickets are a bit pricey there.

The show was opened by Anais Mitchell, whose first song, from her Hadestown folk opera, was good, but none of her other songs caught my attention. But she was very well received by the crowd, which surprised me a bit. 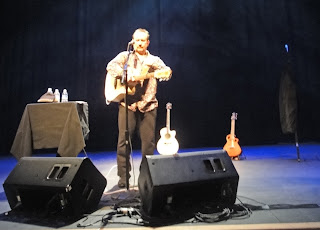 Colin is an accomplished performer, a true professional, capable of holding a good size crowd in the palm of his hands, and he does it with just an acoustic guitar, great humorous stories and even better songs. He's a decent guitar player as well.

Playing in front of a full house, Colin switched back and forth between his solo material and Men At Work classics, with many funny stories in-between.

He played "Who Can It Be Now", with some help from the audience, "Overkill", "Down Under", "Beautiful World", "Waiting For My Real Life To Begin", "Oh, California" and many others. Definitely one of the best one-man shows you will ever see. Colin Hay deserves much more recognition than he actually gets. If you have a chance to see him live, go see him.