Two of my all-time favorites, together under the stars at the Greek Theater. The show cam shortly after Burt and Dionne had reconciled their legal differences, after years of litigation. Also, before this tour, they had never performed together in public.

It seldom rains in September, but the threat of rain was real and, at one point, a few drops came down, to which Dionne quipped "After all, you all came to hear Raindrops Keep Fallin On My Head". We were fortunate, the rain stopped and we got to witness an excellent concert, with nothing but well-known and much-loved songs. Dionne was in top vocal form, Burt got to sing a few himself.

Most of the show featured the songs written by Burt and made famous by Dionne, but there was a segment dedicated to Burt's Oscar-winning soundtracks and one focusing on Dionne's post-Bacharach hits.

More often than not, concert reviews are negative or mixed at best.All-out favorable reviews are very rare, but here's an exception:

Durable Duo
September 14, 1987|PAUL GREIN
Dionne Warwick and Burt Bacharach have been collaborating on records for 25 years (except for one long gap), but until last month they'd never performed together in public. Their concert Friday at the Greek Theatre was well worth the wait. Though most of the selections were oldies, the show was more than just a trip down memory lane--a testimony to the vitality and durability of Bacharach's songs and the awesome power in Warwick's vocals. Though Warwick has long been one of our most gifted singers, she has sometimes seemed haughty and reserved in concert. But the presence of her long-time producer-composer-arranger seemed to bring out the best in her.
The show (the first of three Southland weekend dates) was superbly organized and paced, with both stars on stage for virtually the entire two hours. The two talked and joked freely, not just about "safe" subjects--such as Bacharach's wobbly voice--but also touchy ones--notably their 10-year feud, which ended in 1984. You would expect a concert by these two veterans to be classy and sophisticated, but what made it so memorable was that it was also so dynamic and exciting. Pop concerts just don't get any better than this. 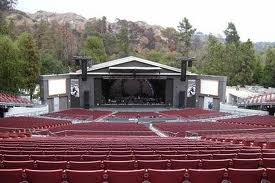