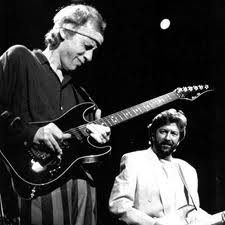 Eric Clapton & Mark Knopfler together - a show not to be missed and I didn't miss it - I went with a coworker, Pawel W, and his wife. It was my first-ever show at the Irvine Meadows. We had decent seats, dead center, about 20 rows back.

This was Eric's gig, Mark was just one of his helpers, along with Nathan East (bass), Alan Clark of Dire Straits fame (keyboards), Steve Ferrone (drums), plus Tessa Niles and Katie Kissoon (vocals). Quite a crew.

They played mostly well-known songs, among them "I Shot The Sheriff", "Tearing Us Apart", "Can't Find My Way Home", "Cocaine", "Sunshine Of Your Love", "Wonderful Tonight" and "Badge", with Mark keeping a relatively low profile. His only solo effort was "Money For Nothing", toward the very end of the show. 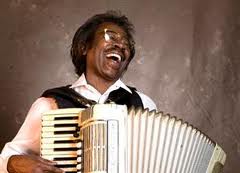 Cajun artist Buckwheat Zydeco opened the show - his appearance could only be described as a massive musical mismatch. I assume EC just wanted to showcase him. 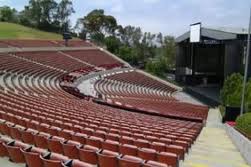 Exiting the parking lot of the Meadows was not an easy thing. Actually it was a horrific experience, it took me about 45 minutes to get out. On subsequent visits I paid extra to park in their "preferred" lot, from where you could easily bolt out.
Posted by Gabe at 9:03 PM