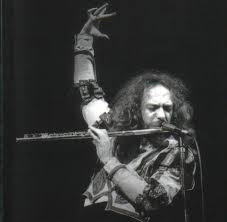 I'd been a Jethro Tull fan ever since I first heard "Living In The Past", then a little later, "Stand Up" became one of my all-time favorite albums. Needless to say, I got all excited when they announced Jethro Tull's three-day engagement at the Universal. 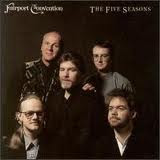 After having grabbed a bite to eat at Jerry's Deli together with my friend James C, we arrived just in time to see the Fairport Convention, which in 1987 included Simon Nicol, Dave Pegg and Dave Mattacks, among others. They played a decent set, which may have ended with "Meet On The Ledge", except that at that time I was unaware of the song and its meaning.

Jethro Tull played a great set, complete with "Bouree", "Songs From The Wood", "Thick As A Brick", "Skating Away On The Thin Ice Of The New Day", "Living In The Past" and "Budapest". Dave Pegg did double duty as Tull's bass player, shortly after having finished playing with Fairport.

Ian Anderson had just turned 40 and was in exceptionally good physical shape. He did all the moves he was known for, he moaned and groaned, then at the end of the show, he released a few huge balloons into the crowd, which were punched around until they exploded. It was a lot of fun.