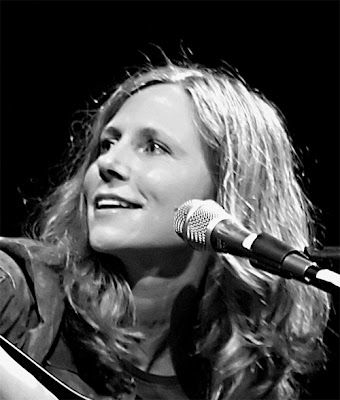 Tracy Grammer is a talented, intelligent and accomplished artist who is right up my alley. So why did I walk away from her concert during the intermission? Let me explain.

The concert was advertised as "Tracy Grammer and Jim Henry". I can't claim that I was intimately familiar with their work, but in my case, the main attraction was Jim Henry, thanks to his outstanding rendition of Richard Thompson's "1952 Vincent Black Lightning", a version I had discovered by accident, while surfing the Internet. Many others had tried to cover this masterpiece, but other than Jim's version, nothing really worked for me. As far as Tracy was concerned, I was totally open to seeing her for the first time and discover, hopefully, great new music.


Here's Jim Henry's version of "1952 Vincent Black Lightning", with Tracy Grammer helping out:
As soon as I walked into the tiny venue, I sensed that something was wrong - there was only one mike on the stage. Bob Stane, the concert organizer, told me that there would be no Jim Henry, only Tracy. Then Tracy took the stage, and started talking and talking and talking, but said nothing about Jim's absence. Then she talked some more, with an occasional song thrown in - well, it was a concert after all. The intermission came after only six songs and at that point it was time for me to get up and go home. Needless to say, I was very unhappy with the whole affair.

The funny thing is that I walked away from a truly talented folk singer, who writes good songs and has the gift of storytelling as well. But she definitely needs help when it comes to the right balance between talking and singing.
Posted by Gabe at 12:33 PM