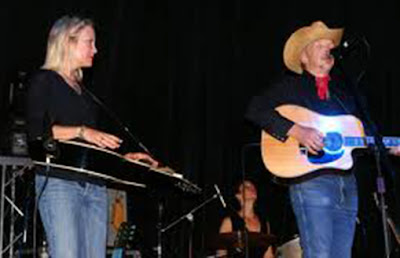 Having won a handful of Grammys between them, Dave and Cindy were bound to put on a great show, and they did. The entire concert has been recorded and archived at:


From the get go, it was clear that Dave enjoyed having Cindy on stage with him, as he was more chatty and significantly more humorous than I had ever seen him before. On the minus side, the concert was a bit short, but that's always the case when an artist's engagement involves a late show as well.
Dave and Cindy were accompanied by  Rich Shea (guitar) and Don Heffington (drums), both were excellent.
Dave is a native of Downey, California, a little known suburb of Los Angeles, so the presence of a song titled "Downey Girl" shouldn't surprise anyone. I'm wondering, though, how many people know that the song is about Karen Carpenter, who went to school, lived and even died in Downey.

The highlight of the show was "Out Of Control", an outstanding song so rich in imagery that it could easily be made into a movie. "Dry River" was another huge favorite of mine that Dave sang that night. Cindy's playing was stellar throughout the show. The evening ended with a great rendition of "What Did The Deep Sea Say", an old traditional song.

We went to the concert with Nancy & Jim from our newly extended family. Both were new to Dave Alvin's music, and after the show they had nothing but nice words to say about their experience.