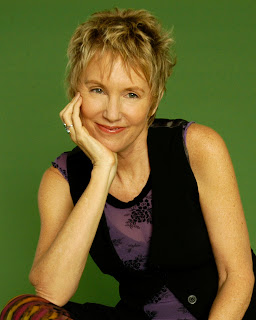 Eliza's concert at McCabe's was a bit of a family affair, with son Cisco Ryder and brother Tony Gilkyson providing accompaniment on drums and guitar, respectively. Father Terry Gilkyson was present as well, albeit only in spirit. Eliza spoke with pride and humor about her late father, a prolific songwriter whose songs I've known since I was fourteen.

During the intermission, I walked up to Eliza and asked her whether Terry's "Greenfields" was on her set list. It wasn't, came the reply, but obligingly, she sang the song for me later in her set and that was very special. After the show, I once again got close to Eliza and thanked her for having taken my request - her response was a wide and warm smile and an approving head nod. Very nice.


Overall, the show was very enjoyable. Eliza writes quality songs, her voice is still good, has fun stories to share and certainly knows how to engage an audience into a sing-along.

I went to the show with Saphire, a co-worker and Eliza fan, and her husband Michael, who just came along for the ride. Saphire loved the show, Michael survived the experience.