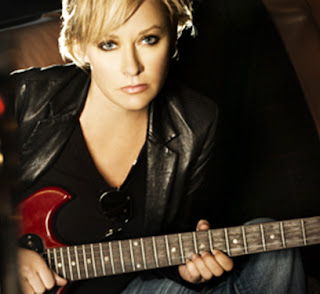 Surprisingly, it took a few weeks for the show to sell out, and that has only one possible explanation - her earlier show at the Roxy, just a few weeks before her gig at McCabe's.

Shelby reached McCabe's just minutes before show time, so she took the stage without a proper sound check. But veteran sound engineer Wayne Griffith took care of business, as usual, and the sound was just fine. Also as usual, I sat in the front row, a spot I typically earn by arriving early and standing in line. My four guests were not thrilled about the waiting part, but in the end it was all forgotten, thanks to yet another perfect concert at McCabe's.

Shelby's voice is divine. As pure and sweet as Patsy Cline's. Also full of feeling, passion, sadness, or whatever else she sings about. Her set consisted primarily of songs from her latest album, "Tears, Lies and Albis", in my opinion her best album ever, better even than "Just A Little Lovin'", her album of Dusty Springfield covers. Shelby was not only the producer of her new album - she also wrote every song, wrote all the words, sang every song, played some guitar, then released the finished product on her own record label. Enough said.

Shelby was accompanied on acoustic guitar by Val McCallum, whom I had seen many times before, but never in an all-acoustic show. The Shelby-Val combination worked to perfection, as one would expect from professionals who are not only musical collaborators, but also personal friends.

Picking the highlights of the show is no easy task, but if pressed, I'd pick "Family Tree", "Old #7" and "Old Dog".