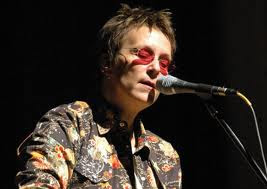 Mary Gauthier (pronounced go-shay) is yet another fabulous singer-songwriter who, sadly, remains unknown to the general public, in spite of the raving reviews she regularly receives. This was my third time to see her live in concert, all three at McCabe's. This show was part of her world tour in support of her just-released album titled "The Foundling". The album is not bad, but not her best either, in my opinion.

Mary came out with Canadian fiddler Tania Elizabeth, a member of the Grammy-nominated band the Duhks. We got to hear most of the songs from "The Foundling". Mary had always been writing powerful songs based on her own stormy life, but nothing quite like "March 11, 1962", a super-powerful and super-personal song about her natural mother who placed Mary in an orphanage soon after giving birth to her.

We also heard a few older gems, among them "Mercy Now" and "I Drink". Overall, the show was excellent, but rather then fiddle, I would have preferred guitar accompaniment, just like in her earlier two shows that I caught.


My friend Steve, at his first Mary Gauthier concert, was quite impressed with her performance.