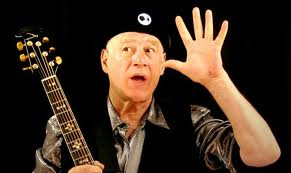 When the concert announcer told the crowd "And now I'd like to introduce an artist who has suffered for his art - now it's your turn. Ladies and gentlemen: Neil Innes", I knew that I was in for a great night. And a great night it was.

This was the Los Angeles area stop of Neil's "A People's Guide to World Domination" tour of the USA. I went to the show with Barry & Barbara, two US-based Brits who were quite familiar with Neil's work, and yes, I was wearing one of my Monty Python T-shirts, decorated with the Neil Innes pin I bought in 2006.


Neil was fantastic. With humor and class, he shared stories and sang songs from all the different phases of his long career, from the "Urban Spaceman" and "How Sweet To Be An Idiot" to the newer "Ego Warrior". I enjoyed very much his typically British humorous songs that he used to sing early in his career - "I'm Going To Bring A Watermelon To My Girl Tonight", "My Brother Makes The Noises For The Talkies" and "On Her Doorstep Last Night".
I particularly liked the "Ego Warrior" bit. If you don't feel like watching the whole video, go directly to the 3:20 mark to see the best part:
The highlight of the show was, without a doubt, "The Philosopher's Song", which quickly turned into a sing-along - I was surprised how many people knew the words.
Just announced: Neil Innes will be back at McCabe's on June 5, 2011. I'll be there.