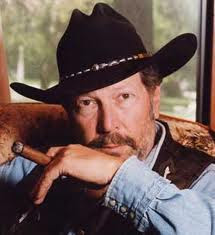 Kinky Friedman is a national treasure, but the nation doesn't know it ... sad but true ... but the 150 folks who showed up to see him at McCabe's were in the know and were rewarded with a truly great show.

Generally speaking, I prefer singers who sing, with minimal chatter between songs. But we all know that some artists just talk too much on stage, and more than once in my concert-going career I felt like shouting out "Shut up and sing". But paradoxically, in Kinky's case, the exact opposite was true, even though there was absolutely nothing wrong with the musical part of his act. I just couldn't get enough of his wit, humor, warmth and intelligence. Kinky is truly special, what a shame that most people don't know him. On the plus side, his relatively low name recognition is what allows me to sit in the front row when he comes to town.

Kinky came out with Little Jewford (Jeff Shelby) and Washington Ratso, both of whom stayed on the stage for the entire show. Later in the set, they were joined by Van Dyke Parks and his accordion.

Plenty of funny things were said, but I only remember two:

"I believe all politicians should serve only two terms. One in office, and one in prison".
"Here's to honor - get on 'er and stay on 'er."

"Amelia Earhart’s Last Flight", "Ballad of Ira Hayes", "Nashville Casualty & Life" and "Homo Erectus" were just a few of the songs he sang. I can't wait to see him again. 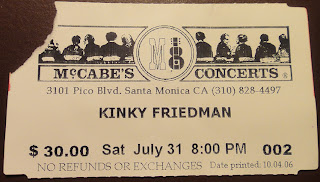